Buying the humminbird piranhamax 197c di fish finder will up your chances of snagging yourself some catch. If you are one of those who always wandered around aimlessly, then this is exactly what you need.

Humminbird Piranhamax 197c was created to enhance your performance and find you the perfect fishing spots.

With technology evolving rapidly, everything, including fishing is undergoing a sea of change. That is something which needs to be taken into account if you are a fisher.

Using technology, which can be used by everyone equally, will enhance your chances of identifying the best fishing spots and focus your energies on them.

So let’s checkout humminbird piranhamax 197c reviews to help you learn more about this device. 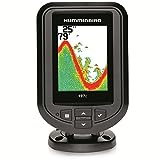 This unit is only usable when you are sure you can mount it in quite conveniently like when you are in a boat or kayak. Make sure that you take into account that it is not a cast type sonar-based fish finder. You can make use of this device in several ways.

Another thing to note is that it is suggested for beginners and semi-pro fishermen. This is due to its overall quality and features. It is lacking in some ways but comes at a relatively low price. At the same time, you really cannot expect anything more than that at this price.

Its features are more suited to entry-level fishermen. Now, let us dive into some of its more serious features.

The device offers dual sonars. One of them is named Dual-beam and the other is called Down Imaging. As the name implies, the Dual-beam is capable of generating two frequencies. It works at 200 kHz and 455 kHz, while the Down Imaging only works at 455 kHz.

Like most of the Humminbird Units, it includes the Fish ID+ function, although it is more effective when a person is using the standard sonar. This feature shows a fish icon on the screen display for each object it considers as a fish. It uses advanced signal processing and evaluates each identified object by certain requirements before it considers it as a fish.

This model comes with three different sizes of icons which represent the size of the fish as identified by the device. The bigger the symbol gets, the larger the fish is.

For the technical nerds, this model comes equipped with an XNT 9 DIT transducer. It is made out of plastic and comes with a transom mount. This transducer comes with 10 feet cable and an internal temperature sensor for careful calibration.

It is capable of casting two conical beams of 28 degree and 16 degree (More on that later), while the Down Imagine can cast an oval beam of 78 degrees side to side angle and 1–2 degrees aft to aft angle.

The PiranaMax, unfortunately, lacks a temperature alarm, courtesy of its low price. It also lacks a temperature graph, however as mentioned above, it does have an inbuilt temperature sensor. The transducer is a transom type but if you ever want a different type, you can call the Humminbird support. They will replace it completely free of cost with a trolling motor or thru-hull type.

The transducers can give out an output of 200 Watt and at its peak, it can deliver 1600-watt output. It outputs an average of 300 watts per RMS. This is more than enough for casual anglers and its sounder power ratings are also fine.

This device is capable of creating two separate beams at the same time. The transducer is their point of emanation. One of the beams is has a cone angle of 16 degrees. This helps it to provide sharper details of the things situated under your boat.

The second beam has a cone angle of 28 degrees and is more functional. This beam has a greater range of depth although the detailing gets lessened. This is due to silt which is mixed with the water is can get detected and current disturbances.

Since the device has dual beams, it operates on a dual-frequency setting. The first one is greater and is set at 200 kHz. This frequency is more effective in shallow waters and gives high-quality readings. It is the frequency of the smaller beam.

Similarly, the 455 Khz frequency creates the 28-degree beam which is used for deeper waters. This creates a distorted but clear enough picture when compared to the first frequency.

As the price of this device is rather basic, so is the specs. Although they are enough if you want to go out for a casual spin. As it comes with a dual-frequency that allows it to scan at narrow and wider frequencies, it creates a better rendering of underwater geography than single frequency devices.

This allows you to differentiate between plants, rocks and seabed. When you are using the 200 Khz scanning, you can scan for up to 97 meters and up to 183 meters when you use the 455 Khz frequency. This range is more than sufficient and operable for most of the small lakes and rivers.

This a useful feature that makes an alarm when the sonar detects that a fish is around your location and matches up to a general size. There is also a depth alarm that only goes off when the depth is less than the selected value.

In the end, there is a battery alarm that gives you a heads up when your battery is lower than the specified limit.

A good sonar got to have a good screen. The dimensions are 12.3 x 16 x 8 inches. These dimensions translate into a 3.5-inch LCD monitor with a resolution of 320 x 240 pixels which keeps it small and compact.

This display may seem to be a downer when compared to other devices but these specs are actually enough to provide you with a detailed and crisp picture of what is exactly underneath you. The screen is a TFT one and you will be able to see the display even when you are under the sun.

As the chances of gathering more information are greater when your picture is more detailed, you are easily covered by this device. This can help you identify the number of fishes, their speed and direction of travel and maybe even their type if you are good at your job.

To any fisher worth their weight, this information will mean a lot as this will let you determine the types of equipment you need to take, the type of lure you should use and give you the idea of the overall situation.

The amount of colour your display can show is also quite important. This device comes with a total of 256 colours which give a detailed picture as have been mentioned before.

This is a great improvement and should not be taken for granted. Especially since the older models only had black and whole colour configurations and a ton of noise. This made them a far cry from the type of models that we can get on the market today.

The Humminbird Piranhamax 197c can provide best readings in trolling speed. However, if you expect a reliable reading at 40 or 50 miles, then you can forget about it. At most you should be able to get decent readings when you are at the speed of 20 to 30 miles but even that depends on a lot of external factors.

As this is a regular device for common and casual fishermen, these kinds of high performing features are not included in it.

The performance of the piranhamax 197c depends on how it is used, external factors, and the expertise of the person using it. Of course, an expert fisherman will be able to derive better results from it even with its limitations when compared to a newbie.

It can often consider other objects like the silt which is mixed into the water as a fish. The type of waters you fish in also have an impact on the performance of the device. If you are trying to fish in murky or polluted waters, you will get lower accuracy. At the sea, the strong currents can disturb the readings.

There is also the fact that you need to be at lower speeds if you are moving around in a boat at the time of fishing. A higher speed of movement will not only disturb the fishes but also confuse the device.

So here we have been reading about humminbird piranhamax 197c reviews which definitely has given you so much of information. Right? And I’m sure it will help you a lot in taking the decision.

This is the most prominent and qualitative fish finder which will definitely make your fishing experience better.